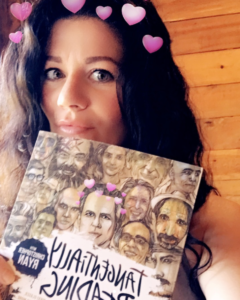 Rayanne Irving is an accomplished kickboxer, writer, horse trainer, public speaker, and all-around badass. As a homeless teenager, she was drawn into prostitution in Vancouver, Canada. Her understanding of her own decisions and the behavior of the people who have crossed her path is one of compassion, forgiveness, and hard-won wisdom.

In the spring of 2015, my partner committed suicide in a horse barn. In a sense by doing so, he killed us both that day; turning my safe haven into an inferno of agony. The absence of his love and support stripped me bare of the two demential character I had been hiding behind for seventeen years. Naked of all attachments to the persona and life I had created as a cowgirl and horse trainer, what I discovered at the bottom of the rubble – was a promise I had made to the universe in the fall of 1998.

I was just a sixteen-year-old girl then, on the run from pimps, hookers, and gangs alike. During the days and nights when I should have been reveling in my youth, instead, I was hiding from the world in dark spaces. Both literally and figuratively. My attempt to reach out for support was met with fear and . Which only reinforced the fear conditioning I had been subjected to by pimps and police alike during my indenture to the streets. Mine was a pain that no one wanted to acknowledge. A pain that no one was prepared to understand – not even my family who turned their heads in denial, content to allow me to carry the burden of blame in silence.

The price of freedom for my young body, had come at a cost that was too steep for my child mind to bare. On the verge of running back to my enslavors, out of my mind in pain, I went to bed each night grasping a bloody chef’s knife in one hand and a box of chocolates in the other; begging a god I didn’t believe in for the courage to slice open my own veins.

Instead, a magazine found its way into my hands. In less than 800 words, a girl whose name I will never know, explained her decision to leave prostitution. Although her’s and mine stories were dissimilar in how we managed to escape the streets, she instilled me with a feeling of connection and hope. I knew right then and there, that someone else knew the truth about the terrors of being a hostage to another’s greed and desires. I was not alone in my darkness. I made a promise, that one day – I would do the same for another.

Over the years and on the rare occasion the death or arrest of a child prostitute did make social media – I recognized, as I aged and healed, that their reporting accomplished little more than scratching the surface of a growing epidemic. Unintentionally social media was helping the pimps to glamorize the public myth of drug-addled Lolita’s and the teenage succubus. (continue)

A powerful essay by Rayanne.