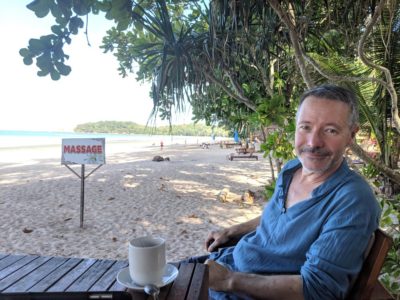 Greg is a sound engineer who is working hard to try to save some of the endangered music of Asia. We met on Ko Phayam, where he’s spent a lot of time with the Moken people (aka “Sea Gypsies”) who have been living on shore since the tsunami swept away their boats in 2004. Greg leads small groups on trips in India, Nepal, and elsewhere, recording songs and languages that are in danger of being lost forever.

You can learn more about Greg’s work here and here.

This episode is sponsored by Mud/Wtr

Music: “Brightside of the Sun,” by Basin and Range; “Global House,” by Oystein Sevag, and “Ganges Delta Blues,” by Ry Cooder and V.M. Bhatt; “Smoke Alarm,” by Carsie Blanton.

Greg sent me these fact checks, some links to things discussed, and so on…

0:20:47 My microphones and recording machine

0:21:52 Old style recording by playing into a horn

0:51:09 ‘Until the End of the World’ starred William Hurt, not John Hurt. Damn, I’m sure those two guys must hate getting mixed up! If either of them is listening, I’m sure they’re saying “Not again…”

0:52:10 The cassette that lead to the Wim Wenders making The Buena Vista Social Club.

0:56:47 Mohan Veena: there are two types. The one used on ‘A Meeting By The River’ is a modified archtop guitar with 20 strings. I think I am wrong that VM Bhatt created it and it is named after him.

1:03:37 Peter Gabriel. There’s a whole topic here of great relevance to what I do, and most ethnomusicologists and field recordists do, that came to mind during the interview but I forgot to follow it through. Gabriel built an amazing recording studio, called Real World. What’s that got to do with anything? Read on…

A recording studio typically has two types of rooms. One is the space where the performers play, and that is typically referred to as a ‘studio’. It is acoustically designed to create a good sound from the instruments. The other is the room where all the recording equipment (mixing console, recording machines, monitor speakers, etc.) are placed, and that is called the ‘control room’. It is designed to provide appropriate acoustics for judging sound quality and making decisions about the recording and mixing itself.

The two rooms are acoustically isolated so that the engineer and producer in the control room cannot hear any of the sound from the studio space coming through the walls – because that would affect the judgements made with the processing used. This is generally a good thing but it can make communication between people difficult because it requires microphones and so on.

Gabriel’s Real World recording studio was designed with a huge control room, big enough that the musicians can set up in the control room with the engineer and producer, thereby having far better communication. The downside of that approach is that the engineer does not have the benefits of the super accurate monitoring from the speakers, but has to use headphones during the recording process. So now the engineer is wearing the headphones instead of the musicians! However, the end result in terms of performance and feel can be much better when the communication is better and everyone is playing live, together, at the same time.

Another famous producer/engineer, George Massenburg, built his Blackbird Studios the same way, so that he could sit in the room with the musicians and have everyone playing live, at the same time, to capture that feel. Here’s a good video showing his approach: https://youtu.be/exQRfHbSwn0

The interesting thing about that whole approach is that it goes back to the way ethnomusicologists, live performance recordists and others have been doing it for years – sitting in the room with the musicians, using headphones to monitor, and aiming for that special thing that happens when all the musicians can see and hear each other and are all playing live together. This is particularly important for Gabriel’s Real World recordings because many of those musicians would not to be used to the typical studio approach of recording one or two instruments at a time, deconstructing and then reconstructing the performance.

And firing off that topic… In 1988 I was doing live sound at World Expo 88 in Brisbane, Australia. I was doing sound on a huge outdoor stage over the Brisbane River, surprisingly it was called the ‘River Stage’. The Expo ran for six months and some nights would be dedicated to the music of a certain country. One night it was musicians from one of the countries in Africa, I cannot remember which one but I’m pretty sure it was Ethiopia. Anyway, I was not given much advance notice (what we call a ‘rider’), all I knew was that it was three musicians playing traditional instruments. So I’m waiting for them to arrive for soundcheck and my crew are not sure what to put on stage for them, risers and so on. We didn’t know what to expect.

Eventually three skinny little old guys with grey beards showed up in loincloths, each holding an instrument. They sat cross-legged in a small tight circle in the middle of this huge stage floor and started playing and singing. They looked so small! They’d never been on stage, they’d never used microphones, nothing. It was totally raw. Straight out of the village. And I had to amplify it for an outdoor gig for hundreds, perhaps a thousand or more people, to hear!

I remember physically moving them a bit so that were in a semi-circle facing the audience and putting a stereo pair of microphones above them in such a way that it did not cast a shadow from the lighting, and that was it. After their gig was a 30-minute fireworks show with lasers and smoke machines and so on. I got a call from the Stage Manager over the headset saying something like “Can you please come back stage. They seemed to trust you. Can you hold their hands so they feel safe while watching all this stuff going on?” They were amazed but also terrified, and kept ducking and holding their hands over their heads every time the fireworks exploded in the air. Gold!

1:19:30 The topic of skin whitening. This reached a climax in India with public outrage over an advertisement about vaginal whitening cream. Here’s the ad:

And an example of some of the concern it raised:

1:22:03 I mention my friend Hans Brandies, in reference to instruments known generically as ‘boat lutes’. Hans is an expert on these things, although his expertise is based on the Philippines variation and I was referring to the ‘sape’ (pronounced ‘sarpay’ of Malaysian Borneo). Here’s a link to Hans’ stuff:

1:38:50 The fusion album I spoke about recording, with didgeridoo and bull-roarer.

Herzog, for the hell of it.