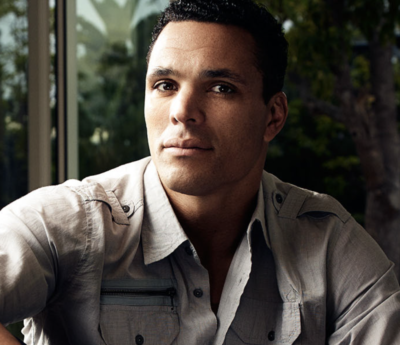 Tony Gonzalez is an American former professional football player who was a tight end in the National Football League for 17 seasons with the Kansas City Chiefs and the Atlanta Falcons. Widely recognized as one of the greatest tight ends of all-time, Gonzalez played college football and college basketball at University of California, Berkeley. Since retiring, he has served as an analyst for Fox Sports.

Gonzalez, a 14-time Pro Bowl selection and six-time first-team All-Pro, holds the NFL records for total receiving yards (15,127) and receptions by a tight end (1,325). Known for his durability and rarely fumbling, Gonzalez missed two games between 1997 and 2013 and lost only two fumbles on 1,327 touches. He was inducted into the Pro Football Hall of Fame in 2019.

Beyond all that, Tony is smart, curious, and totally into challenging his assumptions and biases. I have no idea why a guy like this agreed to do my podcast, but I’m honored that he did. (PHOTOGRAPH BY JOE PUGLIESE)

Music: “Brightside of the Sun,” by Basin and Range; “Star People,” by George Michael; “Smoke Alarm,” by Carsie Blanton.